“Folk is Mother, Classical is Father”: An interview with Keki N. Daruwalla by Debabhuson Borah

A critically acclaimed Indian poet and novelist in English, Keki N. Daruwalla (b. 1937) was born in pre-partition Lahore. He joined the Indian Police Service in 1958 and was in the Cabinet Secretariat until his retirement. Daruwalla has ten volumes of poetry, Under Orion (1970), Apparition in April (1971), Crossing of Rivers (1976), Winter Poems (1980) and The Keeper of Dead (1982) to name a few; two novels including For Pepper and Christ (2009) and five short story collections to his credit. His works have been translated into different languages such as German and Spanish. He won the Sahitya Akademi award in 1984 for The Keeper of Dead. Daruwalla is a recipient of the Commonwealth Poetry Prize in 1987. He was awarded the Padma Shri in 2014. As a keen student of English literature, he had spent a year in Oxford as a Queen Elizabeth House Fellow during 1980-81. In 2015, Daruwalla returned the prestigious Sahitya Akademi award protesting the ‘ideological collectives in the country that have used physical violence of the worst sort against authors’. Daruwalla currently resides in Delhi.

The interview was conducted via email in 2018. 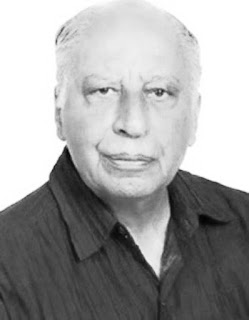 Sir, how would you assess the journey as a poet that began with your first venture, Under Orion?
It is for critics and readers to say how they treat my poetic voyage. My poetry has become more cosmopolitan, is interwoven with other literatures from other languages, I have of course also grown—you can't be the same person at 30 and at 60 or 70. My later poetry—Night River, Map Maker and Fire Altar need to be read by people. They are the real me, not the earlier works. I also lay great store by the new poems in my Collected Poems 1970-2005.That will answer the questions. Also, Naishapur and Babylon, my latest collected poems from 2005 to 2017.

How did your job in the police service contribute to your creations? Is the violence in your poetry a result of your experience as a police officer?
I remained in the police for 11 years only. Am 80 now. Why are you critics focused on 1/10th of my life? It influenced my first two books. But both poetry and fiction have grown wider. I consider myself a fiction writer today, a novelist. Poetry is secondary. Hardly write it anymore.

You once said that poetry for you is first personal, exploratory and therapeutic. What about its social dimension?
Too wide a question. I stick to what I said—poetry is exploratory, a way of discovering your inner impulses—which come out even as you write. I have become more personal in my poetry—have started talking of things as they affect my personal life and dream world.

You returned the Sahitya Academy Award. Is the situation now better? Do you really think that Indian democracy and secularism are in a crisis?
Situation is much worse. After Kalburgi’s murder, we returned our awards. Now Gauri Lankesh was killed by the same pistol and the same sanstha. Rationalist Hindus are being killed. Gauri Lankesh wrote against the BJP. So she was killed. I don’t say the BJP had any hand in it. It is just how fanatics of the right wing have started thinking and behaving. “Now the country is ours,” they think and they feel they can get away with anything. Secularism and democracy are being upheld only by the courts, good sections of the media and some writers. [A] girl of the Bakarwals was killed in J&K [sic]. Things are slightly better with Kambara as President. His predecessor was useless, a pawn of the rightist elements. We wrote a stiff letter to the Academy when Damodar Mauzo, the Konkani poet from Goa, a soft spoken gentleman was threatened, and the Goa police on their own gave him protection. We wrote a very stiff letter. Mr. Chandrasekhara Kambara replied very positively. There is an atmosphere of hate and violent victimization in the country. Gauri Lankesh is an example.

What inspires you to write? Your favourite poets and writers?
What inspires me to write? Ideas, as they come. These days I am writing more fiction, have almost left poetry unless something like the murder of Gauri Lankesh or that young girl of the Bakarwals was killed in J & K , and the killers were supported by two state ministers of the BJP.
My favourite poets and writers these days are Ranjit Hoskote, Arundhathi Subramaniam, Imtiaz Dharker, Jeet Thayil. I find Indian novelists fairly poor. Arundhati Roy came out with a good first novel, but did not like her succeeding novels. Others—I don’t wish to name them—are pretty disappointing.

What is 'tradition' for you? Why did you start writing in English?
My tradition is English literature and poetry from the great Bard and the Romantics down to the 20th century. I only know English well enough. But I speak good Hindustani, Punjabi and Gujarati.

From your contemporary fellow poets like Mahapatra, Ramanujan and others, whose poetry strikes you the most? Any poet in the Diaspora?
Ramanujan, Dom Moraes, Nissim Ezekiel are favourites. Also Adil, Eunice, Saleem Peeradina and some poems of Kamala Das. In the Disapora—Seshadri, Ravi Shankar.

English has become unavoidable in India. Many young writers now prefer to write in English for the glamour attached to it. Don't you think that the hegemonic spread of the English language has been commencing a threat to the indigenous languages? What will be your suggestion to make the regional literature potent?
English, especially now with the computer, and the world becoming a global village, is getting the kind of supremacy it did not have earlier. Don’t grudge it. Don’t whine. No suggestions for making regional literature powerful. Yes, don’t imitate what is happening in European languages. You may borrow a current, but nothing more. Regional literature is based on the language, and its traditions. And these need to be followed, even the folk traditions. Folk is mother, classical is father.

Nissim Ezekiel remarked on your poetry that such a bitter, scornful and satiric tone has never been heard before in Indian English poetry!
I have left scorn and bitterness behind. But society in India is in such a mess, communalism is so rife, violence is so widespread that satire comes out naturally. I am speaking as a fiction writer[,] that I am.

Do you read any Assamese author?
Sorry, I do not read any fiction or poetry in other Indian languages. Have no time. I did a 10 hour a day job for 40 years. Where was the time to delve into other languages?

You said to me over the phone that you were quite busy with your new book. Congratulations in advance and thanks so much for sparing your valuable time! The last curiosity—'Gulzaman's Son' is one of my favourite poems, the poetic persona is perhaps not you!?
No, Gulzaman is not me. And thank you!

With thanks to Debabhuson Borah, Assistant Professor, Department of English, Majuli College.
Email ThisBlogThis!Share to TwitterShare to FacebookShare to Pinterest
Home
Subscribe to: Posts (Atom)

Get Updates by Email