Book Review: preeto and Other Stories: the male gaze in urdu 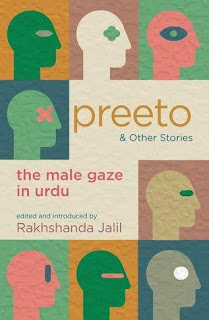 preeto and Other Stories: the male gaze in urdu

Edited and Introduced by Rakhshanda Jalil

After an attempt to explore how women represent women in the Urdu literary world through her anthology Neither Night Nor Day (2007, Harper Collins), Rakhshanda Jalil now intends to invigorate how the male writers view and concomitantly represent women within the realm of Urdu short fiction via preeto and Other Stories: the male gaze in urdu (2018, Niyogi Books). This compendium of thirteen short stories by the male writers in Urdu language, challenges the reductionist ‘male gaze’ that essentializes the woman as the ‘Other’, and constructs her either as the fetish to be revered or the sexual commodity to be gazed at for voyeurism. The meticulous selection by Jalil, penned by stalwarts such as Rajinder Singh Bedi, Gulzar, Baig Ehsas, Deepak Budki, Siddique Alam and several others, registers an altogether destabilizing and deconstructive approach to the ornamental and the fictionalised representations of women that have been the hallmarks of the Urdu fiction until the late nineteenth century. The Urdu stories translated and compiled for the volume etch their women protagonists as the ‘subjects’ to be explored rather than the sheer objects. In several stories, the readers will encounter women having an agency of their own, and articulating this agency as a tool for self-expression, empowerment, emancipation, and eventually to overthrow the authority of men in their lives.

In the title story “Preeto” by Krishan Chandar, the protagonist exercises her choice to make love to a man outside marriage under the charade of performing all her duties ordained by domesticity and conjugality, and is quick and valiant enough to unleash her fury over her husband, the moment she realizes that he had killed her lover, the husband to whom she was in servitude for years, oblivious of the dark and the hidden truth. The protagonist of “Woman” by Rajinder Singh Bedi undermines the compliance expected out of her as a wife, and articulates the agency of a mother, all equipped to shower without any conditions, warmth and love over her partly paralysed child. The eponymous heroine of Faiyaz Riffat’s “Shonali”, a young maid servant despite being a constant preoccupation of the lecherous ‘male gaze’ of her employer is able to exercise almost a maternal authority over the ailing old man, and is resolute to discover her missing soul mate sister while enduring the drudgery of life, amidst the hustle and the bustle of the metropolis. Tasneem in Rahman Abbas’s “Asexual” is ready to be a man’s companion but nothing beyond that, well that’s her choice, so to speak. Bibi Izzat-un Nisa in “The Unexpected Disaster” by Hussainul Haque has every right to search for, and articulate love and compassion beyond her stale married life.

The protagonists who are unable to articulate their choices due to the restrains of ingrained patriarchy do have their ‘moment of dissensus’. Gulzar’s “Man” well interprets that a woman is always bound to answer men; father, husband, or eventually the son. However, Rama is brave and bold enough to love another man, Raman Kumar when her husband turns infidel, although answerable to her own son while carrying her lover’s child in the womb. In Baig Ehsas’s “The Heavy Stone”, the independent modern working woman being an unwedded mother has to abort her child, and is yet audacious enough to make a suggestion of hysterectomy rather than abortion, a crushing blow to her lover’s chauvinist male ego, so to speak. In Deepak Budki’s “Driftwood”, Suman a victim of sexual abuse in childhood turns into a wayward adult and starts using her body as a weapon to smoothen her life. Suman’s wounded psyche and physicality turns into an ‘analogy of resistance’. Zamiruddin Ahmad’s “A Bit Odd” offers a trivial gaze at the notions of honour and dignity, intrinsically ingrained to the patriarchal universe. In “The Ash in the Fire” by Abdus Samad, the young and the penniless protagonist, although doomed to nurse a living corpse is yet capable to raise serious questions about her identity, and the essence of a female being. In Ratan Singh’s “The Wedding Night” a nubile lady gardener is duped by the Sun-God after being enamoured of her beauty. The tale is highly allegorical where the lady gardener’s decision to impart the flowers to her husband on the wedding night stands for her sublime and spiritual love. “Awaiting the Zephyr” by Syed Muhammad Ashraf again poses serious questions on the notions of youth and beauty intertwined with the feminine being.  The elements of magic realism and the mysterious woman in Siddique Alam’s “The Well of Serpents” too have much to say, figuratively about the pain and the suffering of women.

While the cover page of the anthology deliberately spells ‘preeto’, a proper noun with a small ‘p’ to suggest the commonality embedded beneath the ontological being of women, the selections in the text do acknowledge the intersectionalities of class, caste, geography, age, and capital to reveal how diverse could be the experiences of women ranging from rural to urban context, aristocracy to fishing community, banking and corporate sector to modelling world, and college-going student to middle-aged housewife. The short and the crisp introduction by the editor set the ground to explore and scrutinize the ‘male gaze’ in the hand-picked short stories. The editor introduces the reader to the concept of ‘male gaze’ as developed by Laura Mulvey, feminist and film critic; its loose or colloquial connotations, and suggests how the stories selected by her challenge the ‘male gaze’. For the purpose, she briefly introduces the world of Urdu literature and culture and the way it represents women.

The ten different translators for the thirteen Urdu pieces (the title story, “Preeto” along with the two other stories translated by the editor, Rakhshanda Jalil) have tried their best possible to condite the stories with the authentic aroma of Urdu language by retaining some of the original Urdu words and expressions from the source text into the translated text. A short glossary provided by the editor at the end would be a boon for the readers unfamiliar to the universe of Urdu language and culture. The brief bio-notes on contributors and their translators well acquaint them to the readers, those encountering them for the first time. The black and white silhouettes and illustrations preceding each and every short story generate the interests of the readers in the narratives, and also aim at sort of ‘haptic visuality’, visuality that the readers may apprize and experience.